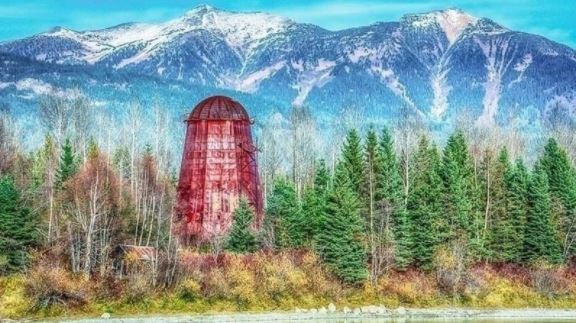 A view of an old beehive burner in Penny, one of a series of small settlements east of Prince George.Screengrab from Change.org

An uproar over a private land owner's decision to put a gate across a key access to the community of Penny has caught the attention of the Ministry of Transportation and Highways - but whether much can be done is in question.

For the last 70 years or so, the Penny Access Road, which meets Highway 16 about an hour's drive east of Prince George, has acted as an alternate way to reach the community.

Travellers still had to cross the Fraser River by boat or canoe to finally reach the destination but, according to a preamble to an online petition launched by Dawn Boudreau, that's no longer possible because the property that holds the landing was recently sold to a new private owner.

"They decided that they didn't want anyone driving onto the landing so have put up a gate on the access road and blocked off the landing and parking area from residents," Boudreau says.

It means there is now just one way to drive into the community - a 129 kilometre trek along Upper Fraser Highway and a series of smaller back roads. Boudreau, who was born and raised in Penny, said it means there now is just one escape route in the event of a fire or other kind of emergency.

In an emailed statement, a MoTH spokesperson said officials are aware of the situation and are committed to working with the land owner and the community to find a solution but also noted officials will have to act "within the limits of the ministry’s jurisdiction and legal ability."

As of Monday, the petition has drawn 385 names.

"The people of Penny are taxed, as are all the other small towns along the way, however we are the only ones without phone, power or access," Boudreau says in the posting. "We are in between Longworth and Dome Creek (who have all services) but seem to be the forgotten land."