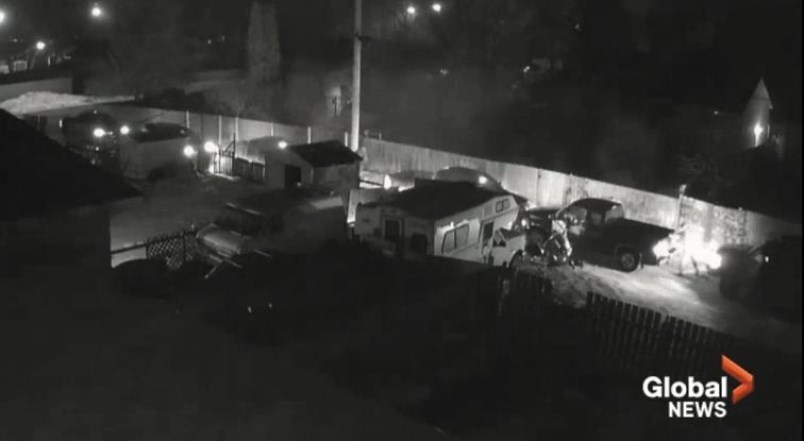 An image from a security camera showing the February 2016 arrest of Cuyler Aubichon, now seeking damages in a civil lawsuit.

A civil lawsuit brought against an RCMP officer in relation to a controversial arrest in Prince George will remain before the court after a B.C. Supreme Court Justice turned down an application to have the action dismissed.

At issue was whether Cuyler Richard Aubichon breached the two-year time limit for filing his notice of claim against Cst. Joshua Grafton, who also faces criminal charges from the matter. The Attorney General of Canada and the B.C. Minister of Public Safety and Solicitor General are also named as defendants.

The arrest occurred on Feb. 18, 2016 but it was not until July 23, 2020 - nearly 4 1/2 years later - that Aubichon filed a notice of claim. However, through his lawyer, Aubichon submitted he did not know he could pursue a civil action until the charges against Grafton had been laid the month before, in June 2020, and claimed the limitation period did not start running until then.

Aubichon further submitted that it was not until September 2019 that he learned Grafton was being investigated for criminal wrongdoing. It was at that point he contacted a lawyer regarding what it meant for him and was advised that if Grafton is charged, he should bring a civil action against him.

Aubichon also submitted that while the physical injuries he suffered during the arrest had since healed, since 2019 he has suffered serious mental health issues as a result of the incident.

Counsel for Grafton argued that the decision to wait until Grafton had been criminally charged was "tactical" and so belied Aubichon's claim he did not know he could pursue a civil action.

But in a decision issued June 17, B.C. Supreme Court Justice Sharon Matthews found otherwise. Noting that by law, she can only draw inferences that are the most favourable to Aubichon, Matthews found there were other plausible explanations for not seeking legal advice before 2019.

"One is that his experiences as an Aboriginal youth led him to believe that there was no point, but that changed when he learned, in September 2019, that Constable Grafton was being criminally investigated," Matthews wrote in a reasons for decision.

On whether the decision to wait until Grafton was charged was tactical, Matthews found it could have been that "despite the criminal investigation, his lawyer did not have enough facts on which to give an opinion that a legal proceeding was an appropriate means of redressing the harm he suffered."

The arrest in February 2016 caused a stir when a video from a security camera on a nearby home showing the takedown was released to a media outlet.

It shows RCMP officer using a service dog to pull Aubichon out of a stolen pickup truck and onto the ground before elbowing him in the head.

Aubichon is claiming Grafton is the dog handler and that he "deliberately misused the dog to terrify and caused severe bodily harm."

Aubichon and another man arrested at the scene - an alley in the 2000 block of Oak Street - were later sentenced to one year probation for possessing stolen property over $5,000.

All of those matters also remain before the court.

RCMP's side of story outlined in response to lawsuit over takedown
Sep 30, 2020 5:01 PM
Comments