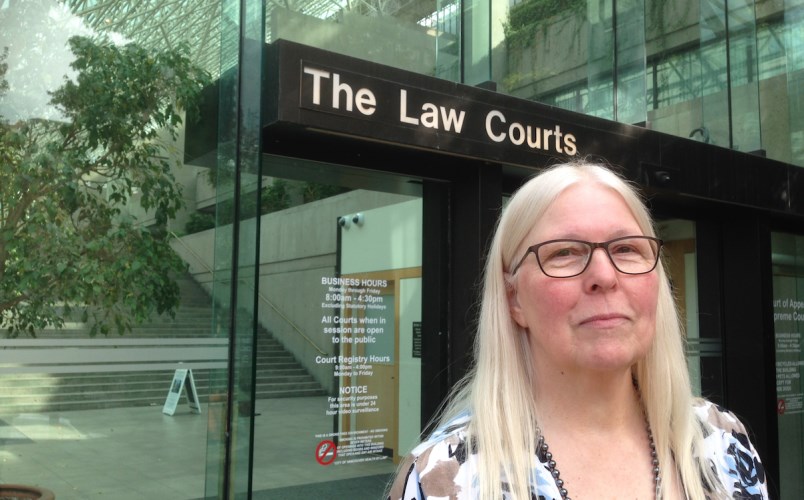 Rosemary Anderson outside the law courts in Vancouver on Oct. 8, 2019. (via Jeremy Hainsworth)

A woman seeking help from a Kamloops Roman Catholic priest dealing with grief from her father’s death in 1976 instead found herself being groped by him in his office, BC Supreme Court heard Oct. 8.

Rosemary Anderson alleged in a Dec. 22, 2016, notice of civil claim the sexual abuse at the hands of Father Erlindo “Lindo” Molon, now 86, started when she was 26 when she sought solace after her father’s death. She names Molon and the Roman Catholic Bishop of the Diocese of Kamloops, A Corporation Sole in the claim.

The court has heard Anderson went to then-Bishop Adam Exner with her concerns about Molon.

Anderson had moved to the Interior city to take up a teaching job with the diocese after doing practicum work in Rock Creek and later in Greenwood.

But, before she could start, her mother called her home as her father was very sick.

“He died with my arms around him,” Anderson told Justice David Crossin, tears streaming down her face.

Soon after she headed for Kamloops where she knew no one.

Distraught, she reached out to Molon in his office at the parish rectory at Our Lady of Perpetual Help.

Anderson said she thought perhaps something was wrong but dismissed it. But, as she moved to leave, she found Molon between her and the door.

“He embraced me, then began fondling me,” she said. “He shoved his ugly tongue in my mouth. I hated it. I prayed to God to stop it.”

Then, she said, Molon took her hand and led her into the adjoining bedroom where they had intercourse.

“I don't remember much until the next morning,” Anderson said.

Then, she said, she told him it was wrong, that he was a priest.

“He said, ‘I have two uncles in the Philippines who are both priests and they have mistresses so it’s OK,’” she said Molon replied.

Much of Tuesday’s testimony focused on Anderson’s childhood, her education, travels and sexual history.

Growing up in Vancouver’s Dunbar neighbourhood, Anderson was educated by nuns at Convent of the Sacred Heart, what is now St. George’s Junior School. From there she went to the Roman Catholic Notre Dame University in Nelson.

The church had always been a big part of her life. She and her six siblings were taught to respect priests and the powers of forgiveness conferred on them through ordination.

“My sex education was from books, and that was after graduation from high school,” she said.

Her first sexual experience was some kissing and fondling in a car, she said. She recalled not knowing what to do and wishing it would stop.

In 1972, she went to Uganda to teach at a Catholic school for a year, at the end of which she travelled through Kenya and Tanzania by herself, meeting people along the way.

One person she met was a young Hindu with whom she “connected,” discussing aspects of religion.

“I decided I wanted to know what sex was like,” she said. “That was my introduction to intercourse.”

Further travels led to her through Dar es Salaam, Tanzania and Mombasa, Kenya.

Getting stranded at a bus station, she called a church for help and a priest came and got her and offered a place to stay. There, she met two members of a church order. They gave her a ride toward the border and put her up for the night.

One of them who was injured asked her to turn out his light.

“He pulled me down and pulled me into a sexual embrace and so on,” Anderson testified. “That went from that to sexual intercourse.”

She said she never really thought of him as a priest.

“I went to confession and I figured it was behind me,” she said.

Continuing her travels, she went to the UK and then France where she volunteered with a charitable organization headed by Jean Vanier, son of former Canadian governor general Georges Vanier.

Visits with Vanier were scheduled.

“Jean Vanier tore a strip off me,” she said. “He criticized me for this and that. They were erroneous accusations. I was very upset.”

She said she became very depressed and attempted an overdose.

She later wrote to Vanier and said she received an apology from him.

“It was an example of what reconciliation was,” she said.

On return to Canada, she completed more education and went to the Interior to do a practicum.

Just outside Rock Creek, she stayed at a Roman Catholic commune, the leader of which she alleges also sexually abused her.

Anderson told a public health nurse who told her to get out, offering her a place to live before she went to live in the home of another Catholic priest who pointed out the job opening in Kamloops and encouraged her to apply for it.

“I was hired on the spot,” Anderson said.

The 42-year-old case of allegations of sexual assault is now, however, not so much about what whether the church will have to pay damages but how high those damages will be, the court heard Oct. 7.

Molon now has dementia and has no role in the case. Justice David Crossin heard Molon has denied Anderson’s claims.

Anderson’s lawyer Sandra Kovacs told the court Molon misused his position of power and trust in the alleged assault in 1976 and 1977.

And, Kovacs said, Anderson went to then Kamloops Bishop Adam Exner, late Archbishop of Vancouver, to ask for help.

Exner concluded, in his own words, that he “had to do something about” Molon, Kovacs said.

She said rumours about Molon and other women kept coming and that Exner had called him ‘promiscuous’ and a ‘playboy.’

However, she said, Molon was allowed to remain but was later removed — which Exner announced at mass in March 1977 — and left Canada.

Crossin heard Anderson had wanted to go to medical school at Dalhousie University in Halifax but could not handle the entrance process due to the self-esteem issues lingering from her alleged treatment by Molon.

Exner is expected to testify next week.