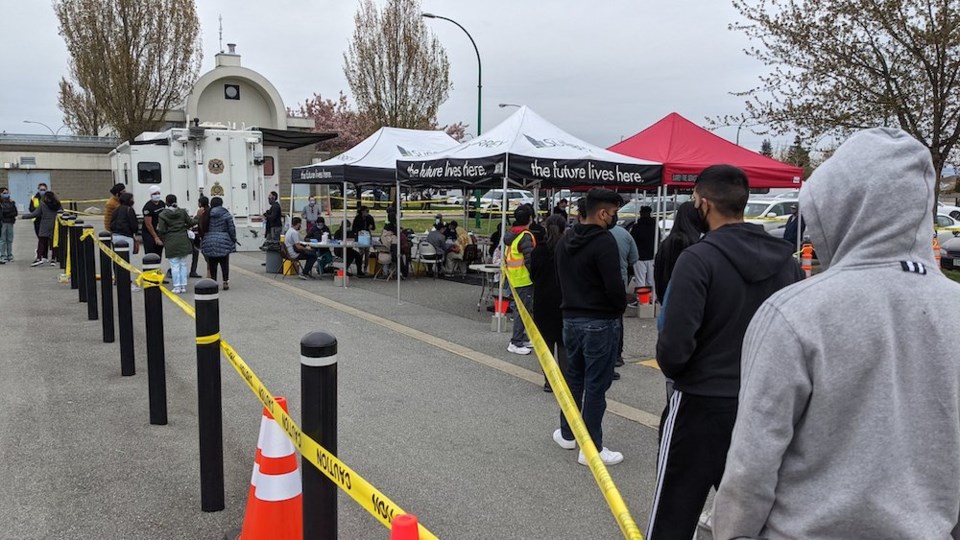 B.C. Health officials continue to apologize after scores of people waited in long lines for the AstraZeneca vaccine at Metro Vancouver clinics this week. Photo via @BhaveshChauhan / Twitter

B.C. Health officials continue to apologize after hundreds of people waited in long lines for the COVID-19 vaccine at Metro Vancouver clinics this week.

People in the Fraser Health Authority said they waited in long lines to receive the vaccine, while others said they weren't made aware of the clinics in the first place.

In regard to the Fraser Health pop-up clinics, Health Minister Adrian Dix told reporters in a press briefing Wednesday (April 28) that he was "happy to report that 4,100 people were vaccinated," but that "we could have done better in terms of communication.

The health minister added that there won't be many more AstraZeneca pop-up clinics until supplies of the vaccine are replenished. However, numerous Metro Vancouverites expressed confusion as some people reported that they received the vaccine at clinics on Thursday (April 29).

Fraser Health confirmed this morning that there would be no drop-in or pop-up clinics for the high transmission neighbourhoods available today.

Dr. Victoria Lee held a press conference on Thursday (April 29), a day after B.C. Health Minister Adrian Dix was quizzed outside the Victoria legislature, to explain why a clinic targeted for residents of high-transmission areas, such as Port Coquitlam, turned into a free-for-all.

Lee also told reporters that there has been some confusion over the two different types of clinics: drop-in and pop-up.

Drop-in clinics are held in existing immunization clinics where registration and booking may not be required. Pop-in clinics, on the other hand, are held in high-transmission neighbourhoods and communities for a short amount of time, typically over a day or two, explained Lee.

In some cases, such as the temporary pop-up clinic in Surrey's Newton Athletic Park, a high-transmission neighbourhood, the clinic was unannounced.

"What we found was before we had made the announcement we already had quite a large number of people that had lined up so there was no need for an announcement," she said.

"As I mentioned we are learning through this experience and apologize for any of the negative experiences that people have had."

Some people say they are confused as to why some people are getting vaccines today at places that are not listed in high-transmission neighbourhoods without an appointment.

Handful of my neighbours got theirs in the last two days and I checked our postal code. We are not in a hotspot 🤨

Today at the Cloverdale rec center, there is a Pfizer pop up til 7pm. Postal code was also not checked here today.

@Fraserhealth let me regale you about what just happened. I’ve been waiting since 5am at Newton athletic park for a vaccine and then I was told no pop up so I went to bear creek at 8:00 and was told something was confirmed there. I’ve been on a WILD GOOSE-CHASE SINCE 5am

@VaxHuntersBC Shoppers at Fraser Hwy & 152 St. has AZ vaccine for 30+, we're the only ones in line, they're starting to administer them at noon

Is this posted on Fraser Health website? How do people find out about the clinics?

B.C.’s top doctor is apologizing for the confusion and miscommunication over the rollout of a series of pop-up vaccination clinics across the Lower Mainland this week that left many hopeful COVID-19 recipients without a jab after waiting in line for hours.

“There were some operational things that were done or not done that caused a lot of frustration and I can see that, and I absolutely apologize to people for the miscommunications and for the confusion,” B.C. provincial health officer Dr. Bonnie Henry said during a briefing.

“We are concerned the way these rolled out. These were done with the right intentions.”

She urged people not to travel to other communities dealing with the hotspots if they did not live there.

The province is not due to receive additional AstraZeneca vaccine doses in the short term.

With files from the Tri-City News and Tyler Orton.