Police say they are not conducting road checks for essential travel
Apr 26, 2021 2:30 PM By: Jane Seyd 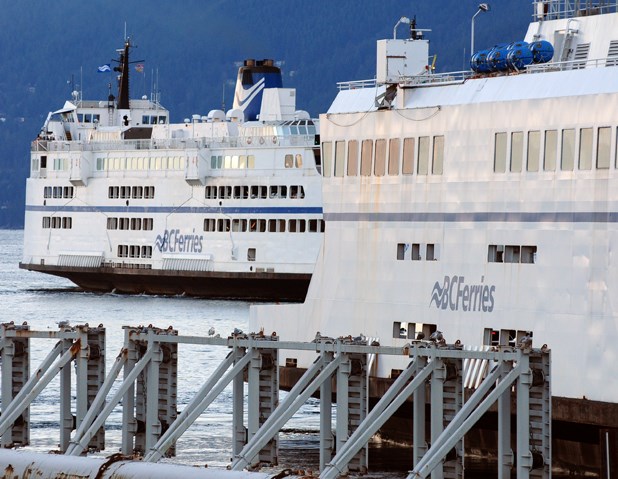 Ferry traffic is down over a third this weekend at Horseshoe Bay terminal in West Vancouver. -Webstock Mike Wakefield, North Shore News files

Ferry travel from West Vancouver’s Horseshoe Bay terminal was down by a third this past weekend as the province’s new restrictions on travel came into effect.

At the West Vancouver terminal, traffic between Horseshoe Bay and Nanaimo, which is in a different health region, is covered by a provincial order which came into force Friday restricting all but essential travel in and out of the Lower Mainland and between health regional.

Traffic to Bowen Island – where a number of day-trippers were recently stranded following ferry cancellations – and to the Sunshine Coast, are not covered by the formal order because they are in the same health region as the Lower Mainland, although recreational travel is still being discouraged.

“It is an honour system,” said Marshall. Ferry staff will ask if travel is for essential reasons but “we’re not demanding proof of travel.”

Marshall said she was aware of only about half a dozen incidents over the weekend throughout the ferry fleet “where we did have to deny travel.” Those cases involved people who weren’t aware of the new restrictions, she said.

On Friday, mayors of Sea to Sky communities including Whistler and Squamish put out a statement urging everyone in the Lower Mainland, including the North Shore, not to visit until after restrictions are lifted following the May long weekend.

So far, however, enforcement of those recommendations is being left up to people’s consciences. Neither West Vancouver police nor the RCMP are doing any checks.

According to the West Vancouver Police Department, “the current public health order regarding travel restrictions does not authorize police to conduct roadblocks or street checks of drives and/or passengers, to determine if individuals are travelling for essential reasons.”

Const. Kevin Goodmurphy, WVPD spokesman, said if in the course of other duties police determine individuals were travelling for non-essential reasons, they could be subject to a violation ticket.

A similar response came from Staff Sgt. Janelle Shoihet of the RCMP who stated, “the RCMP in British Columbia will not be doing random checks or stops to conduct travel restriction enforcement.”

Complaints about people breaking the orders will be followed up, said Shoihet, based on “availability of police officers and priorities at the time.”

People caught breaking the public health orders may be subject to a $575 fine.

On Friday, Minister of Public Safety Mike Farnworth issued an order under the Emergency Program Act to ban non-essential travel between three zones of the province including the Lower Mainland/Fraser Health, Vancouver Island and Northern/Interior Health regions.

Farnworth said the restrictions are intended to stop the spread of the virus through people travelling across large swaths of the province.

While people living in the Lower Mainland are not formally restricted from travel within that area, Farnworth said people need to make “common sense decisions” about their activities.

“So go hiking, go camping, but do it locally,” he said.

Assistant fire chief David Dales of District of North Vancouver Fire and Rescue Services, said his crews – who are frequently called out to trail rescues – have notices a big uptick in the number of people using North Shore parks from past years. “It is a lot busier on the trails,” he said.

But he added most of those out in North Vancouver parks appear to be locals, rather than people coming from other areas.

“We’re quite confident people are following the direction of public health.”